When I started reading Blood on Snow, Jo Nesbo’s latest book, I didn’t have any expectations of being surprised by anything new. I started this book at a time when I was looking to read something that was familiar. I was expecting cold Norwegian streets, gruesome crime, and a deeply flawed hero trying to reclaim some of his humanity by going after those responsible.

Blood on Snow is not that book. Jo Nesbo can still surprise. 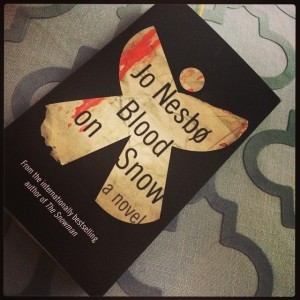 Olav is a contract killer. He’s good at his job – he’s efficient, knows his limits and doesn’t ask too many questions. But when his client asks him to kill his wife, Olav finds himself getting in too deep. When he goes off script and kills someone else, figuring that he’s solved the problem without killing the beautiful Corrina, he brings down a whole other world of hurt on himself.

This book is set in 1977. There are no cell phones, no tracking devices, no surveillance, no street cameras, no emails to leave a trail. Calls are made from pay phones in the street, tickets booked using false names without corresponding ID, and disappearing from Norway to Paris still seems far enough.

This book is short – just 207 pages. While I was reading it I thought of it a sort of novella but now I’m wondering if maybe it wasn’t more in the style of an Agatha Christie. Her novels are rarely more than 250 pages, yet they are complete stories, breathtaking in their complexity. Blood on Snow too has its own secrets to offer.

The best part of Blood on Snow is Olav. He’s unique. He’s what you might get if you crossed Holden Caulfield’s stream of consciousness with the underworld of any given city. Olav is well-read, books are his friends despite the fact that he suffers from dyslexia and it’s difficult for him to actually read them. He’s a deep thinker with a penchant for facts and a good heart – for instance, he has no money from his “jobs” because he sends it all to the widow of one of the men he was paid to kill. He doesn’t exactly mesh with the traditional version of a contract killer Hollywood has given us.

But eventually, Olav’s secrets are laid bare and then you might feel differently about him.

Jo Nesbo, you’ve done it again – you always come through.