So I tried and failed to read John Steinbeck’s The Grapes of Wrath. In order to not completely derail my TBR Pile Challenge, I needed a quick win.

I’m not sure what made me pick The Mathematician’s Shiva by Stuart Rojstaczer over a known entity like Erik Larson’s Thunderstruck (because Larson has yet to disappoint) but I guess I was feeling reckless.

Anyway, my daring paid off. The Mathematician’s Shiva was a delight. 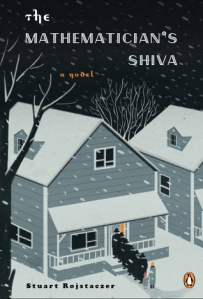 When Sasha’s mother, the greatest female mathematician, dies he wants to be able to mourn her in peace. But since there are rumours that she secretly solved one of the greatest math problems of all time, her colleagues from all over the US come to try and find evidence of the solution. Soon Sasha finds himself sitting shiva, a week-long period of mourning in Judaism, with his dad, uncle, cousin, sort of foster sister and a select group of the hundreds of mathematicians who have come to Wisconsin to pay tribute.

This book was clever and unusual and charming and funny and touching. In a sense, it tells two stories: the story of the shiva and all the antics that Sasha must endure from his family and the mathematicians and his story of having come to America from Russia. His mother, Rachela, was shipped to a work camp in Siberia when she was a young girl and this is where she first discovered her gift of mathematics. Russia ends up fostering her intelligence and eventually she is able to defect to America during the Cold War. As the tale is told, we start to discover where each other characters fits into the story of Rachela’s life.

I really appreciated the focus on intelligence in this novel. All of the characters are smart – they are not necessarily so gifted at interacting with other humans and they dress funny and have a hard time taking care of themselves but they are all geniuses. And even though Rachela is dead, she continues to have massive influence over the rest of the characters. They are all there because she was the best of them, the most gifted, the cleverest and they want to celebrate that.

It wasn’t something that was just casually mentioned either. Sasha waxes poetic about the virtues of intelligence and how it isn’t celebrated enough.

And the fact that the best of them all was a woman – I loved that too.

Oh yes, this was a sweet, clever, lovely little book and I’m glad to finally have read it for myself. Fans of The Humans by Matt Haig,  Jonathan Tropper’s This Is Where I Leave You and Jonas Jonasson’s The 100 Year Old Man Who Climbed Out the Window and Disappeared are sure to enjoy this one too.