Well I wasn’t super kind to the last book I posted about. To balance the scales, so to speak, today I’m going to talk about a book that I completely and totally loved: The Heart’s Invisible Furies by John Boyne.

The first time I read a book by John Boyne, I felt a lot of things. A History of Loneliness made me angry and sad and I wanted to scream. I followed that up with The Boy at the Top of the Mountain which I also loved. Less screaming into the void, but no less moved.

The Heart’s Invisible Furies though. I was completely invested. For a nearly-600 page book, it too me no time to rip through it. And that’s without taking the bus to and from work! 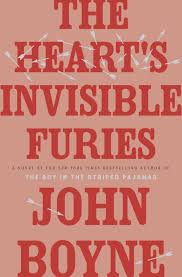 The book begins with the story of Cyril Avery’s mother; Catherine is 16 when she is shamed in front of her entire community in Ireland because she is pregnant. The person who got her pregnant isn’t shamed, and the priest doing the shaming has been up to far worse. But that’s Ireland in 1945. Her entire family looks away as she is thrown out of the parish. She takes the bus to Dublin where she has a plan for the rest of her life.

We meet Cyril when he is a fairly precocious 7 year old, adopted by a couple who insist he’s “not a real Avery” and leave him mostly to his own devices. The day he meets Julian, the son of the lawyer tasked with getting Cyril’s adoptive father off on some fraud related charges, is the day that he falls in love.

Over the course of the novel, we check in with Cyril every seven years. We are with him at boarding school when he and Julian are roommates and best friends, Julian intent on sleeping with girls, Cyril on being around Julian. We check in with Cyril as he begins work in the civil service, going out in the small hours of the morning to hook up with strange men in bathroom stalls and alleys. We see Cyril on his wedding day when he is desperate to have made different decisions and almost can’t stand to live another day; when he moves to Amsterdam, and then New York before being back in Ireland again. We are with him as he finds a different version of the family he knows he can never have, as he comes to terms with the truth about himself. We see Cyril as a child, a teenager, a young man, a middle aged one and even a very old one, haunted by those who have gone before. And at every stage, he has some kind of run-in with Catherine, the woman who gave him up at 16.

It feels like it’s been a while since I’ve been so invested in a book. Since I’ve found one that makes me ignore everything else going on to spend time wrapped up in its pages. I loved Cyril Avery, his unique way of seeing the world, the way that, even with so many people around him, he was essentially alone.

Reading The Heart’s Invisible Furies is like reading about the birth of a modern Ireland as well. Boyne’s latest novel is peppered with priests and traditional women and civil servants who would have Ireland stay as it is, where women have to quit their jobs as soon as they get married and homosexuality is very much illegal. In much the way A History of Loneliness focused on the church’s role in shaping Ireland, The Heart’s Invisible Furies doesn’t shy away from taking to task those institutions and people who would trap individuals in prisons not of their own making.

This book seemed like it came out of nowhere and suddenly it was everywhere. I personally believe that the hype is completely warranted.

I finished this book in a daze, momentarily confused about where I was, bewildered that my journey alongside Cyril was over. I’ve already loaned my copy out to a friend in the hopes that she will fall in love with this book as I did. If you get the chance to read it, I hope you do.

13 thoughts on “When the hype is warranted”