The first month of the#20BooksofSummer Challenge, hosted by Cathy @ 746 Books, is done! And while I may have failed spectacularly at reviewing said books, I have managed to actually read four of my 12 books.

You already know how I felt about Rivers of London, today I’m going to do a two-for-one and talk about Servants and The Fifth Avenue Artists Society because they are ever so slightly related and that’s how I roll.

The Fifth Avenue Artists Society by Joy Calloway is kind of a love story, kind of  Little Women homage, and kind of a mystery. Virginia Loftin is the Jo March in her family of artists that includes a sister who designs hates for fashionable New Yorkers (in the Gilded Age this includes the Vanderbilts and the Astors), one who’s a teacher, and one who is musical. Virginia has been in love with Charlie, the boy next door, for as long as she can remember but his circumstances means proposing to a woman who comes with an independent fortune. In the throes of heartbreak, her brother brings her to a creative salon where writers, artists and musicians show and discuss their work and make connections to hopefully be able to make money from it.

But there are other things going on behind the scenes and some of the shiny young people who showed such promise die in mysterious circumstances. Once Virginia becomes involved with the host of the Society, John Hopper, she’s drawn in closer to the center of the storm.

I love a great Gilded Age historical novel but it took me a while to connect to this one. There was a lot happening in the shadows but never quite enough to pull me in. I’m not convinced that the mystery portion of the plot was given enough attention – it was like Calloway couldn’t decided if that was to be the main focus or a bonus and decided to play it safe by skirting the issue entirely.

That said, the ending was every kind of satisfying. Reading the Author’s Note I discovered that Virginia was based on a real relative of Calloway’s, that she and her sisters were real people and The Fifth Avenue Artists Society an attempt at telling their story (with some embellishments). I kind of wished that we had gotten a non-fiction tale instead. This one was intriguing but not quite the Gilded Age hit I was looking for.

And now we stretch to connect Servants to The Fifth Avenue Artists Society – servants were all but non-existent in the latter but had Virginia and her family still had money they would have for sure had them. 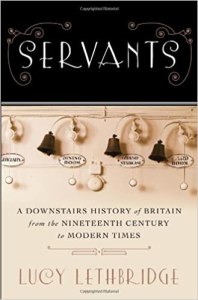 I have long been fascinated by the role of domestic servants in Britain but it’s hard to find books that focus solely on them. I was really excited to come across Servants: A Downstairs History of Britain from the Nineteenth Century to Modern Times by Lucy Lethbridge, hoping that it would fill in some of that knowledge gaps.

Servants jumps all over the place quite a bit. Some sections are about specific roles (butlers, nurses/governesses), others are about service in places like India, still others about how ‘going into service’ was viewed at different points in time. It never felt like it was a super focused book, even though it was very thoroughly researched.

I recently read Perfect Wives in Ideal Homes by Virginia Nicholson and that book did an incredible job of telling the stories of women in the 1950s who were “just” housewives. I think I was hoping for more of that from Servants. I wanted to hear the stories of the men and women who chose to spend their careers in service to others, what their backgrounds were, what they thought of the work they did and the people they worked for. Mostly it was more or less anonymous snippets from letters and journals without a real sense of the people who wrote those things.

And for a book about servants we sure got to hear a lot from those who employed them and what they thought of them and the work that they did (hint: not much).

Reading Servants mostly made me want to go back and read more of Virginia Nicholson’s work. Thankfully Singled Out is part of my #20BooksofSummer list!