It used to be that I was incapable of appreciating the 1920s. It wasn’t just that the fashion wasn’t my jam, it was that it seemed like such a decadent time for no reason, that people were just intent on getting drunk and having a good time.

I think my ideas of the 1920s have undergone a bit of a transformation in the last year. Books like Villa America, and  Z: A Novel of Zelda Fitzgerald have opened my eyes to a new way of looking at the era.

Especially where women are concerned.

Flappers: Six Women of a Dangerous Generation by Judith Mackrell provided me with an opportunity to read some non-fiction about badass women of the 1920s with my new attitude.

And I loved it.

What’s unique about this book is that it’s as much a historical account of the time as it is a biography of these women. We only get to see these women during the decade that would make them all famous. Once it’s 1930, Mackrell more or less walks away. She lets us know what happens to all of them, of course, but only their lives from 1920-1929 are scrutinized and laid bare.

Mackrell shows us how these women chose to live lives that were bigger than what they had all known. Josephine Baker was destined to be a young mother, trapped in the ghetto she was born in, hated by her mother for her beauty. Instead, she learned how to dance and lived a life in public in Paris, adored by thousands. Tamara de Lempicka’s family left Russia after the Revolution made it impossible for her class to stay. Finding herself in Paris with a husband who did not want to work, she decided to paint. Her work (a self-portrait is featured on the cover of the book) became incredibly fashionable, a bulwark of the Art Deco style.

Lady Diana Cooper, born and bred English nobility, became a nurse in the First World War and continued to throw off the mantle of the expectations of her class when she became an actress. Tallulah Bankhead also found fame on the silver screen – known to be an outrageous personality, she was unapologetic about her sex life.

Nancy Cunard, the Cunard Line shipping heiress, devoted her life to fighting racism and fascism, became the muse of some of the 20th century’s most distinguished writers and artists (Ernest Hemingway, Ezra Pound and James Joyce to name a few), and became a style icon. And of course Zelda struggled to step out of the shadow of her more famous husband, pushing herself with her own writing and eventually finding a kind of peace in her dancing before a nervous breakdown relegated her to hospitals.

These women were complete and total badasses before it was even possible for women to be badasses. They fought for their independence with whatever means they had, and demanded a spot in the history books. These women paved the way for others to come and demand more from this world. They were visionaries and trailblazers and I’m grateful to Judith Mackrell for putting the spotlight on them.

This from my friend who had just read and loved it. I told her that no I hadn’t read it and actually didn’t plan on reading it because I just don’t like reading books set in the 1920s and don’t have the same romantic view of the Lost Generation. Really, if I read one more book about the wife of someone famous where she’s just this worshipping appendage, I will scream.

My friend ignored all of this and forced her copy of the book into my hands.

Because I am a peculiar kind of creature who is unable to return the munificence of a leant-book unread, I read it.

And I loved it.

I’d always felt sorry for Zelda Fitzgerald, thought she was a bit of a pathetic figure. Therese Anne Fowler showed me Zelda in a completely different way and now I’m kind of a fan. 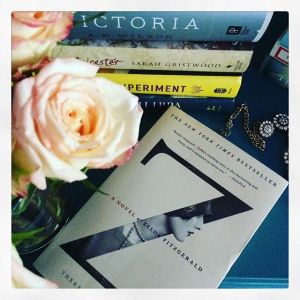 Zelda Sayre was born in Montgomery, Alabama, the youngest child in a well-known family. Her father was a judge and the expectation was that Zelda would marry well and be the kind of young lady her family would be proud of.

Zelda had other plans. She relished being born at a time when women were starting to be able to do things for themselves, she wanted to run around town with shorter hemlines, leaving her corset at home. When she meets Scott Fitzgerald, it changes her whole life.

The story of Scott and Zelda Fitzgerald has been the fodder for stories for nearly 100 years. What I appreciated about this version was that Zelda was her own, complete person. She is trying to figure out where she fits into this life that Scott has created. She suffers from health problems that make it impossible for her to have more children after their daughter, Scottie, and her husband gets angry with her that she’s not giving him sons.

As Scott gets more famous and struggles with his own identity, with his desire to make a mark on the literary world, crippled with a desire to be a part of the class of people that has more money than they know what to do with, Zelda is left to pick up the pieces. But she refuses to just be a good little wife after a while. After she tires of the constant parties, after the drinking wreaks havoc on her system, she looks to find other ways of spending her time.

She writes and paints and dances but is never taken seriously as a writer, artist or dancer by her husband. She, who has followed Scott across continents and oceans based on what’s best for his career, is relegated to the role of wife and mother in his eyes. It’s no wonder Zelda ended up hospitalized – Scott was enough to drive anyone to mental exhaustion.

Oh yes, I loved this book. I loved the meditation on marriage and womanhood that Zelda offers in a time when women are just starting to be allowed to think of themselves as people. I loved Zelda’s unwillingness to settle for the kind of life her parents saw for her. Mostly I appreciated this new perspective on a woman I’ve long thought of as the patron saint of pathetic literary wives.

I am firmly Team Zelda.

The book Gone Girl is kind of a big deal. The movie is coming out in the fall and there seems to be an appetite for books in a similar style. So publishers can be forgiven for trying to capitalize on that – books need to make money so that more of them can continue to be published right?

Which brings us to today’s book review: The Other Typist by Suzanne Rindall. Right on the cover it says  if you liked Gone Girl, you might like this book. I’m not ashamed to admit that that line sold me on this particular book. Reading it I wondered more than once “where is the Gone Girl aspect?”

The Other Typist is a first person narrative told by Rose Baker, a typist with a New York City precinct in 1924-25, right in the middle of Prohibition. Rose is an orphan, living in a shared room in a boarding house, harbouring a crush on the upstanding, older Sergeant she works with. Rose prides herself on her work ethic and her good, clean, law abiding values.

But then Odalie Lazare comes to the precinct to help the typists with all of the extra work that’s been created due to Prohibition and Rose finds herself strangely drawn to this woman. She’s jealous when Odalie pays more attention to the other typists and is thrilled when Odalie’s sights come to rest on her. Before she knows it, she’s moved into Odalie’s grand Park Avenue hotel suite, mysteriously paid for by Odalie’s “father.”

Soon Rose is accompanying Odalie to speakeasies all over town, even running errands for her. She suspects that Odalie has something to do with the bootleggers but she really doesn’t want to know the whole truth so she doesn’t try too hard to figure it out.

I’ve mentioned on more than one occasion that the 1920s as a setting for stories is not my thing. I found this novel, the combination of first person narrative and the emphasis on Odalie’s facial expressions as a way of moving the story along, to be better suited to a movie. Everything is explained so much, rather than letting us work out what’s happening. It wasn’t subtle enough.

I found that that real story didn’t get started for a long time. It’s a 350 page book – it took about 200 pages for me to be interested. None of the characters are likeable: Odalie is a fake, you can see that from the beginning; Rose is way too uptight and then she becomes kind of obsessive about Odalie.

A little bit of google sleuthing tells me that this book is actually in pre-production with Keira Knightley in a starring role, so I guess I wasn’t the only one that saw the movie potential here. This may be one of those rare times where the movie is better than the book.