Put your hand up if you love Russian history!

I will confess that most of my Russian history lessons have been confined to Tsars, their wives and children. I’ve been enamoured of the scandals, marriages, plots and descriptions of jewels for years.

But all of that leads, of course, to the Russian Revolution.

Helen Rappaport, author of the brilliant Romanov Sisters, has come to the same conclusion. Her new book, Caught in the Revolution: Petrograd, Russia, 1917 – A World on the Edge, looks at what the Revolution meant for those expats living in Petrograd at the time.

In Caught in the Revolution, Rappaport relies on letters and diaries from eyewitnesses – those diplomats, journalists, nurses, engineers and workers who were there when all hell broke loose. In the Romanov Sisters, Rappaport managed to shed light on the sheltered lives of the grand duchesses who were mostly a mystery and she manages to illuminate the chaos of the Russian Revolution in the same way.

But this book is chaotic. This is the kind of dense non-fiction (a lot happens in a short amount of time) that will turn off all but the most dedicated readers. It is also kind of all over the place, owing in part to what was actually happening in Petrograd: bread lines turning into protests, the abdication of the Tsar, the provisional government taking over, riots in the streets, Bolsheviks fighting the ‘Whites’, blood running in the streets, journalists hiding out in hotel rooms for days without food, stranded by the violence outside.

But for all that, Rappaport still manages to dig out some gems including the observations of one Phil Jordan, an African American valet and chauffeur that accompanied the American ambassador. His letters, the only known published account of the revolution by an African American, provide readers with a sense of exactly what it was like to endure the Revolution.

Caught in the Revolution is not a book that I’d recommend across the board. It’s the kind of book that will appeal to a certain kind of reader. But if you’re interested in the time and are up for the challenge, I’d recommend this without hesitation.

You guys know that I LOVE reading about Royals. Royal women are probably my favourite non-fiction subject to read about. For Christmas, you may remember I asked Santa to bring me The Romanov Sisters: The Lost Lives of the Daughters of Nicholas and Alexandra by Helen Rappaport.

My letter must have missed him because, no dice.

But then for my birthday, my friend got it for me! I actually shrieked with delight when I unwrapped it because a) I really wanted to read this book and b) it was the only book I got for my birthday if you can believe that. I meant to savour it, I tried really hard to hold off reading it, just enjoy the having. But I couldn’t.

I posted about this on instagram but every time I read about the last Romanovs I’m just so sad the whole time. No matter how glamorous or beautiful or wonderful their lives might have seemed at the time, you know that it won’t last, that their end will be horrific. And it makes me sad.

This one was harder to read than anything previously because Olga, Tatiana, Maria and Anastasia were so young. They paid the ultimate price for things that really they had nothing to do with. I’ve read a lot about Nicholas and Alexandra, how their marriage was a true love match, how Alexandra’s debilitating shyness made her seem like a snob, their complete reliance on Rasputin, how they both hated the bureaucracy of governance and would have preferred the life of the landed gentry in England. But before this book I’d only read about the girls as their lives related to their parents’ – their births, some of the illnesses. But they were never fully formed people. 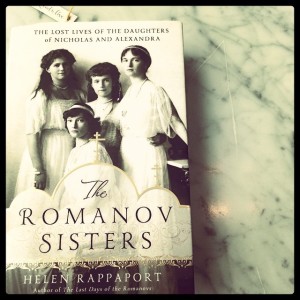 The Romanov Sisters finally introduced me to the daughters as people in their own right. Olga, serious and intelligent, a worthy successor to her father if only the rules hadn’t favoured male offspring; beautiful Tatiana who found her calling as a nurse during the Great War, taking charge when her mother’s illnesses kept her in bed; charming, sweet, self-effacing Maria, the girl that boys who met her wanted to marry – Louis Mountbatten kept a picture of her in his room until the day he died; and mischievous Anastasia,who didn’t have a great love for the classroom but loved military parades and acting in plays for her family. Their lives were short and extremely sheltered – for years their biggest outing was a weekly trip to their aunt’s house for tea – but by all accounts they were polite, charming and totally devoted to each other.

There were a lot of mistakes that were made in the lives of Nicholas and Alexandra. There’s no way to know if anything done differently would have actually changed anything. I suspect that if some major things had been different (for example had they been honest with the Russian people about Alexei’s hemophaelia, they wouldn’t have needed Rasputin) their end might have been different too. They would have at least been able to escape. Rappaport has written other books about the last Romanovs where she follows them to the very end. In The Romanov Sisters she chooses to leave them right before the end. She writes that it was an emotional experience writing about them, spending so much time with them over the months that she was writing. I totally understand the decision. I’ve read about the ending – I prefer to think of the sisters as they were: in lovely white dresses with big white hats, laughing together.

One of the last letters that Olga wrote from Ekaterinburg really had me choking up. It was true then and it’s true today:

“…that they should remember that the evil there now is in the world will become yet more powerful, and that it is not evil that will conquer evil – only love.”