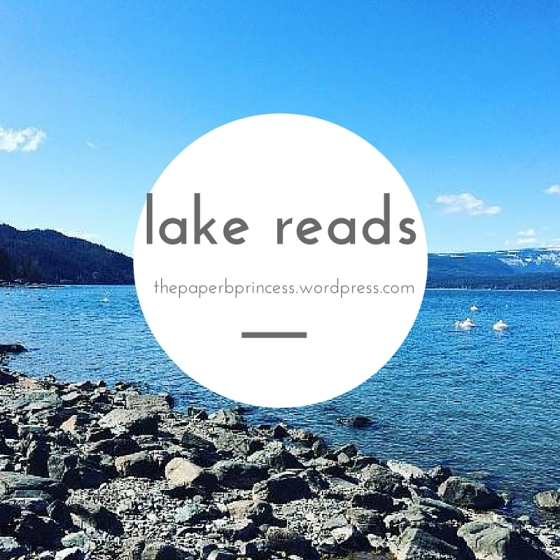 Look at what I did! Learning and growing, guys.

As my shiny new graphic may have indicated, I’m off for another long weekend at the lake. This time around is a little different – my sister, Audrey of Aud Thoughts, is coming with! I’m sure for a lot of people, the addition of an extra person would mean that less reading would occur. But Audrey and I are the kind of sisters that will just read together. I suspect Holly and Amanda at Gun in Act One are similar.

But you didn’t come here to hear about sister reading (did you?). You want to know what I’ve brought with me to the lake, right? I have some good ones coming with me! Right now, I’m reading one of these.

The Outliers by Kimberly McCreight. You may recall that I LOVED Reconstructing Amelia. Her second book, Where They Found Her, was just OK for me. The Outliers is our book club book – apparently this is the first in a trilogy. Wylie gets a text from her best friend Cassie, ‘Please Wylie, I need your help.’ This is the first Wylie has heard from Cassie in over a week so of course she’s going to do what she needs to to help her friend.

Sarong Party Girls by Cheryl Lu-Lien Tan. This one is described as Emma set in Modern Asia so that’s really all I need. Amanda read it recently and said it was more serious than she expected it to be but I guess now I’m prepared for that!

Primates of Park Avenue by Wednesday Martin. First of all, this woman’s name is Wednesday and I can totally get behind that. This book, an anthropological look at the insanity that is the Upper East Side, sounds gossipy and snotty and great. I’d been meaning to read this one for a while and when I walked into Chapters the other day, the paperback was on for $15. Yes, please.

The Last Anniversary by Liane Moriarty. Guys, this is the last of Moriarty’s books that I have to read! Once I read this, I will have read ALL of her books and have to wait for her to write something new. (I read Truly Madly Guilty and it was amazing. Totally maintaining the Moriarty Standard of Excellence). Sophie’s perfect boyfriend is going to propose but on the day he’s going to do it, she ends the relationship and breaks his heart. A year later, he’s  married to someone else and Sophie wonders if he’s the one that got away. Listen – it might not sound like your cup of tea but when Liane Moriarty is at the helm, a straight forward story becomes so much more.

Belgravia by Julian Fellowes. Anyone else feeling like they need a hit of Downton? This book from the show’s creator is set in the 1840s but begins on the eve of the Battle of Waterloo in 1815. It all starts at the Duchess of Richmond’s infamous ball and I am here for it.

The Fire Witness by Lars Kepler. Guys, I can’t get enough of this series. Kepler has become one of my favourite Scandinavian crime writers. After this one, I still have Stalker to go. This one tells the tale of a gruesome and strange murder in a home for teenaged girls. Joona Linna returns to find out what happened. Lake rule: you must always bring crime fiction.

The Hopefuls is also coming up with us because Audrey has requested it. And! For the first time ever, my husband wants to read a book that I recommended. I’m not supposed to make a big deal out of it or he won’t read it… (The book is Dark Matter)

Hope you have some good reads on deck this weekend!

Well peeps, I’m back! I had the most incredible time away, saw some amazing things, ate all the food, drank all the wine and only read two books the entire time:  A Dragonfly in Amber and Voyager by Diana Gabaldon. They were the perfect vacation books to read on trains and planes, in airports and train stations but I was so glad to be home and get to choose something else.

As soon as I finished Voyager this week, I started Kimberly McCreight’s Where They Found Her. I LOVED McCreight’s first book, Reconstructing Amelia, so when I heard about this follow up, I was all over it. And now that I’ve finished it, it seemed like the perfect kind of book to review after my absence.

Because this is the kind of story that will be RUINED if I accidentally let the wrong detail slip, here’s the summary from Goodreads:

At the end of a long winter, in bucolic Ridgedale, New Jersey, the body of an infant is discovered in the woods near the town’s prestigious university campus. No one knows who the baby is, or how her body ended up out there. But there is no shortage of opinions.

When freelance journalist, and recent Ridgedale transplant, Molly Anderson is unexpectedly called upon to cover the story for the Ridegdale Reader, it’s a risk, given the severe depression that followed the loss of her own baby. But the bigger threat comes when Molly unearths some of Ridgedale’s darkest secrets, including a string of unreported sexual assaults that goes back twenty years.

This book reminded me of Liane Moriarty’s Big Little Lies, in that something truly disturbing has happened in this little community and we find out little by little via the perspectives of these three characters. Kind of like a cross between that and The Girl on the Train.

While the mystery of the dead baby is, obviously, incredibly distressing, it’s pretty clear from the beginning that that dead baby is just the tip of the iceberg. The underlying issue seems to be crime at universities and the way that it’s handled. We’ve all seen in the news how sexual assaults on campus go unreported or unpunished. McCreight uses it as an underpinning for the rest of her story.

I was totally taken in by this story. Reconstructing Amelia was such a joy to read that I wondered how a follow up novel could possibly compete. But Where They Found Her does. It more than holds its own. There were moments a third of the way through when I kind of wondered how anything could possibly relate to anything else but by the end, when the punches where coming fast and furious, leaving me breathless with their sheer brilliance, I was convinced.

I think it’s safe to say that McCreight is a crime fiction heavyweight. After this I will probably read anything she writes.

I’m staring five days of book-reading freedom in the face. We’re heading out of town and I made sure to bring plenty of reading material to keep me occupied. Forget making sure I have weather appropriate clothing (even though the West Coast is the best coast, there’s some tricky weather this time of year. But not snow so this is not a complaint), I need to ensure appropriate reading material at the lake. After careful consideration (priorities guys) I decided to bring along: Fangirl (Rainbow Rowell), The Murder of Roger Ackroyd (Agatha Christie), Harry Potter and the Chamber of Secrets (JK Rowling) and Paris: A Novel (Edward Rutherford).

Then, since I’m almost done The Remains of the Day, I snuck John Green’s The Fault in Our Stars in my bag at the last minute.

My intention is not to actually rub this freedom in your faces – presumably you have a long weekend ahead of you as well. I came here today to tell you about a book I read last week: Reconstructing Amelia by Kimberly McCreight.

You guys. This book. Delicious. Unexpected. Terrific. So many feelings.

Kate Baron is a single mom working in a fancy law firm. She’s working through a high profile case when she gets a call from her daughter’s school: her daughter, Amelia, has been caught cheating on an English essay and has been suspended for three days. Kate needs to come pick her up immediately.

Kate ends up getting caught in midtown traffic and it takes her over an hour to reach the school. When she does, there are police cars and firetrucks all over the place and she is told that her daughter committed suicide. She jumped off the roof of the building.

This text drives Kate to find out what actually happened. Does it have anything to do with the texts she’s been receiving about Amelia’s father? What is the deal with the student newsletter? Amelia would never cheat on an English essay, what happened?

This book has been compared to Gone Girl a lot. If you liked Gone Girl, I’m pretty sure you will enjoy Reconstructing Amelia. Like in Gone Girl, the narrative changes back and forth: in one section you are following Kate as she works through the last days of Amelia’s life, drawing all kinds of conclusions. In the next, you are with Amelia as her last days actually unfold.

My immediate reaction when I was reading the Amelia section was that those of you that loved Gossip Girl would love this book. The student newsletter reads like an opening of Gossip Girl. The story follows a bunch of very privileged teenagers with way too much time on their hands. But in the middle of all of their teenaged crap, they are struggling to fit in, to conform, to be equal to their peers. McCreight does an incredible job of channeling their teenaged voices.

It was hard to watch the story unravel seeing, like Kate and Amelia couldn’t, how close each actually was to taking a different path. How many times each wanted to come clean with the other and didn’t, setting them both down this path that leads to so much grief.

If you’re looking for a long weekend read, or you’re starting to mine for beach reads, Reconstructing Amelia. Do it.