Heading into the long weekend, I was planning on reading something easy, a “guilty pleasure” style book. But by the time Monday rolled around, and I still hadn’t finished that particular book (or even really cared to read it at all) I decided that I’d maybe need to admit defeat and move on.

(Remember at the beginning of the year I said I’d be better about not finishing books?)

I looked around the apartment for my next book and settled pretty quickly on Someone You Love Is Gone by Gurjinder Basran. Basran is a local author whose debut novel, Everything Was Goodbye was the winner of the Search for the Great BC Novel contest in 2010 and the Ethel Wilson Fiction Award in 2011. It was also a Chatelaine Book Club pick in 2012. 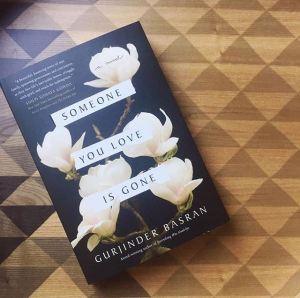 In Someone You Love Is Gone, Basran explores loss and grief and the coming to terms with a new reality. Simran’s mother has just passed away after a long illness. Simran doesn’t know how to cope with the void in her life; the past couple of years have been spent caring for her mother and suddenly her mother doesn’t exist anymore.

Except she kind of does. As she starts moving forward with her life, Simran’s mother haunts her, sits with her and talks about the past, about her siblings and the need for family in this world. They are just little glimpses of her but they offer Simran some comfort. Especially as she works through her family’s past, decisions that were made and the repercussions that rippled out through the generations.

When Simran was 10, her brother Diwa, always a special boy, believing himself to be reincarnated, is sent away to live with relatives. No explanation is ever given to Simran or Diwa; Diwa is gone and the siblings rarely see each other anymore. Soon a new sibling, Jyoti is born but the age difference means the sisters never become close.

There’s a lot going on in this book; three times are moving forward and while that often irritates me, removing me from one story when I’m just starting to settle into it, in Someone You Love Is Gone, it works. Basran has given each story the time that it needs, she hasn’t weighed it down with extraneous details or complications. Each story fits inside the others, like a series of Russian nesting dolls.

Simran is without a doubt the anchor of the story. Parts of the book are in first person from her perspective and again, normally this would drive me crazy, but here it felt natural and right. You can feel Simran’s sadness, the grief that she’s just coming to terms with, both over the loss of her mother and all the other losses she’s had to deal with over the course of a lifetime. All three of the siblings have grown up kind alone inside this family that just wants to function and get through the days, to not dwell on the bad things that have happened.

I thought it might be heavy novel, dealing with death as it does. I was worried that I’d become mired down in the darkness that I assumed would come with this book. But there is a real freedom in this book, a weightlessness that comes from Basran offering her characters redemption.

Basran has crafted a quiet, thoughtful novel. It is at once incredibly personal, the story of one family, and completely universal as I’m sure readers will be able to see themselves and their own families in it.

Another thumbs up on the CanLit front.