So far this summer, two books have really stood out for me in terms of hype: The Rosie Project and Crazy Rich Asians.

The Rosie Project was a spotlight read on the 50 Book Pledge (have you participated yet? I know it’s the middle of summer, but it’s a great New Year’s Resolution for 2014!) and was basically forced on me by the all-knowing reading guru at my local bookstore.

Well everyone was right because The Rosie Project is freakin’ adorable. It is such a feel-good read! A total delight. 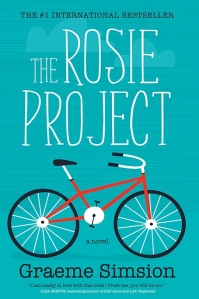 Don Tillman is a genetics professor at a university in Australia. He’s completely brilliant and has his life running just-so. There are rules and a schedule but he feels like he needs a wife. So he comes up with a way to find one: The Wife Project. He comes up with a questionnaire to hand out to prospective dates so that he can find the perfect mate and not waste a lot of time on women that aren’t perfect matches.

Then the universe sends him Rosie who is the exact opposite of what his questionnaire is looking for. But he finds himself wanting to spend time with her anyway.

This new plan sees them doing all kinds of crazy, unscheduled, things like tending bar for a medical school reunion, flying to New York City, climbing down fire escapes and making friends in unexpected places.

It’s a short read – less than 300 pages – but it will leave you with a big smile on your face.

The other book that I kept running into this summer was Crazy Rich Asians. I saw the book launch party photos on instagram and the cover of the book is pink and gold and shiny and by that alone I was intrigued. My favourite gossip blogger, Lainey Gossip, (as well as being my go-to for gossip, her blog has now become one of the places I mine for potential new reads) mentioned the book as well so as with Life After Life, I was going to get it.

I’ve never read a book like Crazy Rich Asians. It’s a cultural tutorial into a world I had no idea existed. A world so extravagant and over-the-top it seems completely made up. But the author, Kevin Kwan, insists that it’s real and it’s getting crazier and more over-the-top every year.

The story of 3 insanely wealthy and interconnected Chinese families over a summer leading up to the wedding of the century is fictional, but the world described really exists. When the son and heir of one of the largest Chinese fortunes brings his ABC (American Born Chinese) girlfriend home to meet the family, the games are on. So much gossip and backstabbing. It’s delicious while being totally eye-opening.

For a fictional book, it is surprisingly full of footnotes to help explain cultural facts and rituals as well as some actual history of the area and the families.

I was left wanting more. Much more. I hope there’s another book but it looks like we’ll have to be satisfied with the movie for now.

What’s been your favourite summer read so far?

I recently finished the second of the Fjallbacka trilogy by Camilla Lackberg – The Preacher. It was in insanely absorbing read – I finished it in 2 days (two days of complete bliss) and was left wanting to run out and pick up the third, The Stonecutter.

In The Preacher we once again follow Patrik Hedstrom as he attempts to unravel the mystery surrounding a dead woman they find in woods. This time though it’s not someone they know. And she’s been left, naked, on 2 complete skeletons belonging to women that went missing in the area 20 years ago.

Super creepy right? Patrik is under pressure to solve this case – its the middle of a beautiful summer and these bodies are driving the tourists to pack up and leave. Add to that the fact that Patrick and his partner Erica Falck are expecting their first child any day, you’ll forgive him if he starts to think some seriously crazy thoughts. Everything he learns seems to point back to this one well-known local family.

The Preacher takes you much more into the inner workings of the police station – reintroduces you to that motley cast of characters that include an eager young officer ready to do his due diligence, a couple of old hands that are just as likely to be spending the day at a rest stop with a picnic as they are doing actual police work and a police chief who may or may not have a mail order bride in the wings. It’s a wonder Patrik is able to get anything done really.

I really enjoyed this book as well although this one was more Patrik Hedstrom-centric and I found myself waiting for the bit when Erica Falck would make her presence felt more. Erica just stays home dealing with a bunch of unwelcome houseguests, while Patrik runs all over town trying to figure out this case.

Lackberg is really good about taking you down a path that you think you’ve figured out, only to ensure that it dead ends and you are left wondering how you ever went there in the first place. She rewards her reader and then frustrates you. Round and round we go until the, very satisfying, conclusion that has you wondering how you didn’t see it all coming from the beginning.

That, or I am dumb as a bag of nails. I guess that that’s not completely outside of the realm of possibilities…

I’m anxious to get my hands on the next book which shouldn’t be too hard – all of a sudden Lackberg’s books are popping up everywhere! Great summer reads! And although they are billed as a trilogy, having flipped through a few it seems more like a series at this point. More to read!