It’s time for Literary Wives, a blogging club that looks at the depiction of wives in fiction!

If you haven’t already (because I was supposed to post about this on Monday), please make sure to check out the posts by the other wives and join in the discussion if you’ve read War of the Wives by Tamar Cohen! There are definitely spoilers ahead.

Just before we get to it, I want to apologize to the other bloggers in this group for dropping the ball so egregiously this time. For some reason it was impossible for me to get a copy of this book (from 2015!) and even though I ordered it from Amazon weeks ago, it didn’t arrive until Monday. And then I got a stomach bug. But I finally finished it last night so let’s do this. 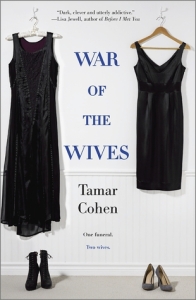 Selina Busfield looks great for her age. At nearly 50, her skin is smooth (thanks to Botox), her body lean (thanks to yoga at her club), and her home is magazine worthy (thanks to years of buying piece by expensive piece). Her children are nearly grown, and although they aren’t necessarily who or what she would have pictured, they are fine. Her husband, Simon, splits his time between their home and his apartment in Dubai where he works in property development. It’s not ideal but Selina has more than enough to be getting on with, running their home, keeping up with their friends and keeping herself in shape.

And then one night she gets a call from the police. Her husband’s body has been found in the river. Not in Dubai, where he’s supposed to be, but in London. And that’s not even the biggest surprise. At the funeral, a woman shows up and says that she’s Simon’s wife and this is their daughter.

Lottie Busfield has been with Simon for the better part of 20 years. Where Selina is contained, Lottie is a more artistic personality, younger than her husband by 15 years, content to live their life based on what he wants or needs. Two years ago she and their daughter, Sadie, moved back to London while Simon kept working in Dubai.

Now that their husband is gone, both Selina and Lottie have to come to terms with the truth of their marriages, the infidelities and worse, the financial implications of his death.

This book had actually been on my TBR list for ages, for 4 years! I was drawn to the idea of a melodrama where two women face off after losing a shared husband. But I felt like this book couldn’t decide what it was. For the first two-thirds it was what I expected. Selina and Lottie are both grappling with this new reality, dancing around each other’s families, working through the stages of grief in the midst of the betrayal of the other’s marriage. I liked that the book was split into sections named for the stages of grief, it gave the book a nice flow and allowed Cohen to move the story forward in time pretty seamlessly.

In the end I felt like this book couldn’t decide what it wanted to be. Was it a melodrama, a novel of loss and lies? Or was it a thriller? A “the call is coming from inside the house” kind of deal? I could have done without the allusion to possible incest (I choose to read a lot of messed up fiction, but incest storylines are something I just don’t mess with), the creepy son, the shady dealings the husband may or may not have been involved in, and the stalker vibes.

What does the book say about being a wife?

Both Selina and Lottie wrap their identities in the shell of being wives. Although very different from each other, once their wifehood ends (Selina becomes a widow, Lottie learns her marriage was never legal), each unravels. Selina gives up being the image of the perfect wife: she stops going to the gym (can’t afford the monthly club dues anyway), lets her hair grow out, has casual sex with Simon’s financial advisor. Lottie just retreats into her grief. She thinks she sees Simon everywhere, she wants to live in the memories and the dreams of him, she gives in to the chemical peace offered by the sedatives prescribed by her doctor.

Both women got together with Simon when they were relatively young. Selina gave up on her law degree with a year to go and never finished it. She focused on being a wife, and then a mother, making their home a haven, showing her love by cooking and doing everything for her family. When the children are grown (the youngest is 17 when Simon dies) and Simon is gone, she has to figure out what her life looks like as a single adult, something she never thought would happen. She also assumed that she’d be financially looked after, that Simon would always ensure that she wouldn’t have to worry about money. When that security blanket is also ripped away, Selina faces having to make her own way for the first time at 50. Without the protective layer of being Mrs Simon Busfield, Selina is suddenly at the mercy of the world.

Lottie was also a student when she met Simon, who was 15 years older (and had just had a new baby a month earlier). She let Simon take care of her – she took for granted that he would handle their finances, didn’t participate in the decisions around their money or mortgages, was content to sit by the pool and read novel after novel while they lived in Dubai. In London she works in a hotel or spa during the day and works on children’s book illustrations at night but is under no illusion that her work will pay the bills. She’s also been a fairly hands off mother to her teenage daughter, happy to watch how close Simon and Sadie are to each other. Simon’s death basically blows up Lottie’s entire life and she doesn’t have the personality of Selina to weather the storm.

Basically, Tamar Cohen is telling married women to make sure to participate in the finances!

Be sure to visit the other blogs and get in on the discussion! My apologies again to my fellow Wives for being late to the party on this one.